Hippy camp for the rich? Inspiration for environmental activists? One of the most important think-tank weekends in the world? Exactly what are The Do Lectures all about?

The Do Lectures are in their second year, and already have become something quite unique. For four days, 20 speakers and 60 delegates share tents, meals, stories, laughter, drinks and songs. The food is local, the talks are green, and everyone is a ‘Doer’.

The event is the brainchild of David and Clare Hieatt, the founders of Cardigan based clothing company Howies. Howies makes t-shirts. Very nice t-shirts too. But what Howies sells is ideas. Big, inspiring ideas about sustainability, quality, and always trying to do something you believe in.

In areas that Welsh businesses have not always been so great, Howies have excelled. Creating a modern brand based on traditional values, making green cool, and caring about what you do – and who it affects – are all part of the Howies story. Howies catalogues read like manifestos, and they are very, very good at letting social networks – online and offline – do their marketing for them.

But David and Clare wanted the Do Lectures to be about more than ideas. Or they would have called them the Idea Lectures. And this idea about doing came when they realised they wanted to do more to change things, but didn’t know how.

“The idea is a really simple one, and as old as the hills to boot,” says David. “A set of talks for Doers. It’s all about story telling. People who have done amazing things have an amazing ability to inspire the rest of us. Their words cut down a path for us to follow. Their stories inspire us. They teach us we can do things too. Just by telling their stories. It’s simple but magical stuff.”

It seems that a lot of people are already agreeing with him. That list of the great and the green – from ministerial advisor to surfer – that’s not even the speakers. It’s the people who paid (or more often their company paid) a quite large amount of money to spend four days in a tent listening.

Admittedly, this is camping at its most civilized. Fforest campsite, just outside Cardigan, claim that staying in one of their yurts, kåtas or domes is more like being in a hotel than a tent. It’s actually probably the best of both.

And yes, attending the Do Lectures costs quite a bit of money. £1,000 for an individual, £2,000 if your company is paying. It might be expensive, but all the signs are that next year, demand for tickets is likely to far exceed supply. But David thinks it’s still going to be vital to maintain the right mix of people. “Just being able to afford to come isn’t enough,” he says. “We vet each attendee to make sure they’re a potential doer.”

Using some ‘crowd funding’ means that at least some who can’t afford the full price have a chance of attending. Louise Brown from Edinburgh was inspired enough by the videos she saw online of last year’s lectures to become a ‘founder member’. She donated £50, just to help this year’s event happen, but also giving her a one-in-twenty chance of winning a ticket.

“When they phoned to say I’d won, I was shocked and amazed, as it really hadn’t crossed my mind. I thought it would be amazing for those that went, but I hadn’t pictured myself there.”

Even if Louise had paid the full amount, she doesn’t doubt it would have been worth every penny. “What I couldn’t have imagined was how much it would get my brain buzzing with ideas. I think I might look back in a year or two and say it changed my life.”

Louise might be happy to save the money to go again next year, but she might not be allowed. “One way to deal with only having 80 seats is to say to attendees that you can’t attend in consecutive years,” David is considering.

So Louise might be watching the talks online again. Which is really just as much what the Do Lectures are all about. “The talks are meant for everyone,” says David. “This year we hope one million people will see them for free. Essentially, the 80 people who attend pay for everyone else to see them for nothing.”

Last year’s talks have already been viewed half a million times, so the one million target doesn’t seem impossible. That’s a lot of people to be inspired, and start doing good things. Could a small group of people in a small tent in a not very large country really change the world?

One of the government advisors present certainly thought so. Hywel Lloyd, specialist environmental advisor to the UK government, says he learnt a lot, and enjoyed it even more. So does he think the talks can have any real influence on policy and society? “Yes, absolutely,” he says. “Partly through the web, though as much if not more so through the conversations we attendees then have with those we can and should influence.”

Louise is certainly spreading the word after her Do experience. “I work for a large financial organisation, and one of the first things I did on returning to work was to find out what my company’s policies are on green issues,” she says. “My first objective is to raise awareness, and I then hope we can make some positive changes to the way we work.”

The man who sells Wales to the world was there, and he’s hoping that The Do Lectures can spread the word about more than sustainability. Roger Pride, marketing director for the Assembly Government’s Department for Enterprise, Innovation and Networks, is very happy to see The Do Lectures doing his job for him.

“I certainly think that as the Lectures grow in scale and influence they can have a positive effect on Wales’ reputation,” says Roger. “It is rare that an event comes along which is original. The Do Lectures really do appear to be different to anything else – as Wales’ brand position is all about original thinking, the fit is perfect.”

But how ‘Welsh’ are The Do Lectures? With delegates from all over the UK, speakers from Europe and America, and viewers online from all around the world, some might say not very.

But Roger thinks that, actually, they are very Welsh indeed. And it’s an image of Wales he’d like more people to recognise. “Howies is one of the few brands which strongly uses its Welsh provenance. Both Howies and the Do Lectures tap into important current issues, and approach those issues with a ‘Welsh’ twist. They are very much seen as contemporary pioneer brands. It’s great that such brands can be born in modern Wales.”

Neil Crocker is a Cardiff-based creative industries consultant, and now one of The Do Lectures biggest fans. “Just an insanely brilliant amount of stuff happened over four days,” Neil says of this year’s event. “It was probably the best and most inspiring weekend I’ve had for almost a decade.”

As founder of the creative network Nocci and organiser of the Cardiff Ignite talks, Neil probably has considerably more inspiring weekends than most of us. So what made this weekend so special?

“The thing that struck me most is that despite there being 20 utterly brilliant lectures, some of the most inspiring conversations were happening over the dinner table,” he says. “Everyone there believed in doing something, and when you get 80 people like that together in a beautiful setting, things are bound to happen. The lectures themselves just acted as a catalyst.”

With a big professional stake in seeing Wales taken seriously as a modern, doing nation, Neil thinks an event like the Do lectures is just what our reputation needs. “It’s the kind of thing that could easily grow into one of the most important ‘think tank’ weekends in the world, and what better showcase for what our beautiful country has to offer?”

Oh, and the lectures. There was Gerald Miles, the Pembrokeshire farmer and anti-GM activist who drove his tractor to London. A man from Sweden who makes wonderful axes (yes, axes. For chopping). A hyperactive adventurer who cycled around the world. The Haverfordwest engineer who’s designed the best (and greenest) washing machine in the world. And our own Assembly Minister for Environment, Sustainability and Housing, Jane Davidson.

And 15 others – writers, designers, campaigners, educators. They were all fantastic. World-class, inspiring ‘Doers’. Watch them giving the talk of their lives at thedolectures.com. And if you ever get the chance to go to The Do Lectures, do. And perhaps even buy the t-shirt. 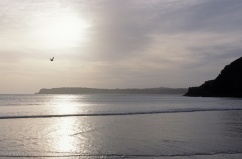 Walkers on the beach, Byron Bay

Family on the pier at sunset

Playing on the beach

Sunset in the western Algarve