It seems so obvious. Kit up with a wetsuit, buoyancy aid and helmet. Then climb, swim, slip, slide and scramble your way along some spectacular coastline, pausing occasionally to throw yourself off a cliff.

Except that right now I don’t think it’s such a great idea. Toes over the edge, I peer down at the water below. Twenty feet looks an awfully long way down when you’re about to jump off.

For something so obvious, coasteering hasn’t been around that long. And it wasn’t born in the mind of some adrenaline-crazed New Zealander, but here on the wild shores of west Wales. Coasteering pioneer Andy Middleton grew up in St Davids, and spent his childhood exploring the rugged north Pembrokeshire coastline.

“Like kids always have and always will, we’d go down after school and climb along the cliffs to find places to jump off,” Andy remembers. Andy and his friends grew up to become experienced surfers, climbers and kayakers, and it wasn’t long before it occurred to them to use some of this kit on their coastal jaunts.

And a new sport was born. “Surfing without a surf board, kayaking without a kayak, climbing without ropes,” as Andy describes it. “It was just immense fun, it opened up this whole area of play we’d never thought possible.”

On the beach our vastly experienced TYF guide had given us the team talk. “You’ve got to look out for each other in coasteering,” Tom told us. “You’re safe in the water, and you’re safe on the rocks, it’s in between you need to watch out.”

It looked a bit wild out there, waves rolling in and crashing over the jagged rocks. So was it really dangerous? “It’s a fine line between having an adventure and not feeling safe. It’s my job to make sure we stay the right side of that line,” Tom reassured us. I hoped Tom didn’t have many bad days at work.

My fellow coasteerers were all first-timers. Peta and Ian were visiting for the weekend, and “just fancied something different”. Robert had been dragged along to keep his more extreme brother Richard company. He didn’t really expect to enjoy himself, never having jumped off anything higher than a pavement. “I don’t like heights. In the swimming pool I’m the one who uses the steps,” Robert told us all. “Mind you, I don’t really like swimming either.”

We’d built up slowly, getting used to wading, scrambling and swimming, the first jump no more than a large step. We even tried a few somersaults as we gained confidence, but apparently that’s not such a good idea from fifteen or twenty feet.

“The secret to safe jumping is control,” Tom tells us, as my coasteering partner Llio prepares herself for the big one. “Just make sure you cross your arms in front of you, point your toes and look straight ahead.” Llio nods, then leaps off screaming, limbs flailing wildly. “That was great,” Tom congratulates when she surfaces. “But maybe next time, try and point your toes just a bit more.”

Robert had done well swimming in the white water, the extra help from wetsuit and buoyancy aid giving him new confidence. Now he was plunging down from the highest jump of the day. He disappears under the water for a long time, but comes up with his fists in the air. “Absolutely fantastic. Utterly brilliant,” he shouts up to us in elation.

And it’s my turn. Just one small step and I’m in space. I wasn’t expecting so much time to think on the way down. My first thought is “why on earth am I doing this?” Then I think, “I’m still thinking – when’s the water coming?”

At last I hit the sea, the salty froth rushing up my nose. Coming up for air, not knowing whether to laugh, sob or splutter, I know Robert is right. This is absolutely fantastic.

But coasteering’s not just about jumping. According to Claire Carlile, “Coasteering is a journey. It’s about exploration, and what better way of exploring an awesome natural environment than being right in it, with nothing between you and the elements.”

That journey can be different every time, depending upon the conditions or the experience of the group. TYF Adventure even grade their coasteering routes. A blue line for beginners, a white line with more surf and white water, red line for the thrill seekers and flat lines for the fit and experienced.

For many, coasteering is a chance simply to take pleasure in the natural life around them. Andy says, “There’s something spiritual about being out in an environment where there’s so much energy, it really reconnects people back to nature.” TYF even have a green line coasteer that concentrates on exploring the marine life. “Extreme rockpooling,” Andy calls it.

Swimming together across open water, I look around and think our little group has grown. But there’s no helmet on the sleek head bobbing alongside us, just the whiskered face of a curious grey seal. She watches for a while, no doubt unimpressed with our landlubber water skills, then disappears off into the surf.

But even without an appearance from the crowd pleasing seals and dolphins, there’s always plenty of wildlife to see on a coasteer. Coasteering guides are full of information on rock pool creatures, and Tom was no exception. I now know considerably more about the eating habits of sea anemones, and have a few surprising facts about the love life of barnacles with which to impress down the pub.

Back on dry land, wrapped in fluffy jumpers and sharing a flask of hot chocolate, six new coasteering converts re live the experience. “That’s the most fun I’ve had in years,” raves Peta. And what would she say to anyone thinking of trying coasteering? “Just give it a go, you’ll love it.”

Walkers on the beach, Byron Bay

Family on the pier at sunset 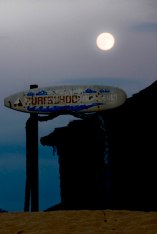 Playing on the beach

Sunset in the western Algarve